Thien Cung Cave is related to a legend about an ancient Dragon King. Accordingly, after the Dragon King helped people defeat invaders, he returned to his cave. In that year, a severe drought happened, which greatly affected crops, therefore, people had to ask for the help of the Dragon King. One day, there was a young couple determining to seek the Dragon King. They had a daughter named May. When May grew up, she was fall in love with Dragon Prince. Later on, their wedding was held for 7 days in the center of the cave. It took place in a happy and boisterous atmosphere with dragons flying in the clouds, baby elephants and lions dancing, huge pythons slithering around old banyan trees, and giant eagles outstretching their wings.

Thien Cung Cave (Heaven Cave) is located in the north of Dau Go Cave. The cave has numerous stalactites and stalagmites with special and strange shapes. Due to the narrow cave door and the strong development of the flora surrounding it, the entrance of Thien Cung cave was hidden. Therefore, the cave was discovered quite late.

In 1993, in a big storm, fishermen came here to avoid the storm and accidentally explored a large cave. Because stalactites inside had the shapes of the dragon, phoenix, and Four Pillars which made those people think about an imperial palace. The cave was named Thien Cung Cave (Heaven Cave). Indeed, visiting Thien Cung Cave, tourists may have the feeling of entering into a heavenly palace with magic and a magnificent system of stalactites.

Thien Cung Cave has beauty like a palace of heaven. Located in the South of Halong Bay, about 4 kilometers from the cruise ship port of Dau Go Island; Thien Cung Cave has an altitude of 25m above sea level. The road to the cave is luxuriantly covered by trees. Passing through a narrow crack in the door, tourists will enter the cave and be surprised by the vivid and stunning beauty of stalactites. On the east cliff of Thien Cung Cave, there is a huge and monumental picture of ancient characters in fairy tales with smooth and exquisite lines created by nature. 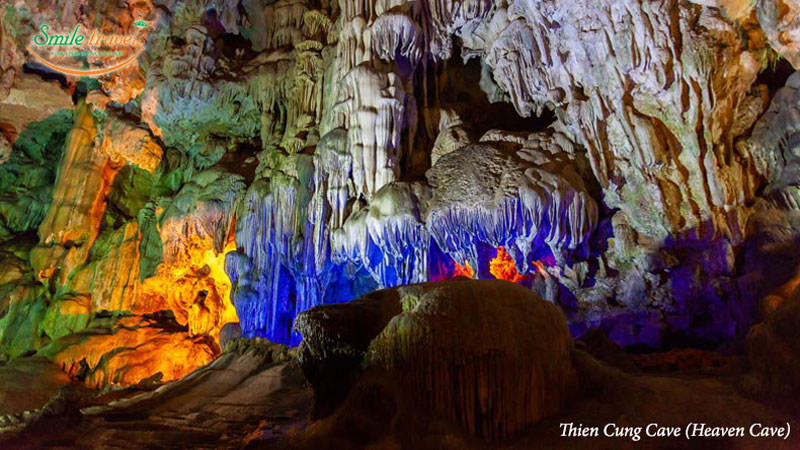 In the center of the cave, there are four large pillars. From the bottom to the top of these pillars, many strange shapes such as birds, fishes, scenes of human activities, flowers, leaves, etc. On the north cliff of the cave, there is an image of celestial maidens dancing to congratulate the wedding of May and Dragon Prince. Under the arch of Thien Cung Cave, a cluster of stalactites hangs down creating a natural stone curtain. Somewhere in the Cave has the sound of drum-like in a festival in an old village. Actually, it is the sound of wind blowing through holes among stones. Looking up at the arch of the Cave, tourists can see the green color of stalactites as they are in the Penglai scene.

In the last area of the cave, the white, red and blue lights create a magnificent shot. In addition, this area has three ponds with clean water. According to the legend, this was a place where May bathed her 100 children and grew them. A winding path was a place witnessing May and 50 children left the cave to explore a new land, the rest stayed with their father to build and develop their homeland

Getting out of Thien Cung, tourists may feel like they have seen a unique and meticulous art museum, which was created under the hands of the Creator beyond the imagination of humans. Having its marvelous beauty, Thien Cung Cave is one of the attractions in Halong that should not be missed.

One Day Tour To Halong Bay From Hanoi

REVIEW ALL THE BEST CRUISES IN HALONG BAY:

Smile Travel is one of the fast growing Tour Companies in Vietnam. We are as Inbound and Outbound Tour Operator Licence No 01-1051/TCDL-GPLHQT. We specialize in tailor-making and customizing individual, Couple, family and group tours throughout Indochina destinations.